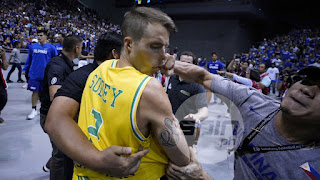 The Philippines team — including those sitting on the sideline — made a beeline for Kickert. The brawl quickly moved off the court as the players crashed through advertising boards next to the base of the hoop.

The Boomers tried to defend their teammates and NBA star Thon Maker launched a series of karate-like kicks at the men in blue.

Some of the most sickening scenes saw players being punched and kicked while they were lying helpless on the floor, while one Australian had a chair thrown at his head by someone who wasn’t even a player.

Reyes was apologetic about the situation getting out of hand but alleged Kickert hit several Filipino stars during the warm-up, which contributed to the flare-up that saw Kickert floor Roger Ray Pogoy after he fouled Boomers guard Chris Goulding.

“The foul of Pogoy on Goulding was called a foul, an offensive foul. It was a basketball play but he (Kickert) was the one who came in and then he hit Pogoy for the fifth time.

“You can’t expect to do that to a team five times and not expect to retaliate so that’s what happened unfortunately.

“That triggered the entire brawl and as unfortunate as it is, like I said, it’s something that you have to be there to know what really went down.”
at 2:58 AM