Barangay Claro M. Recto chair Valentino Lagman dared over the weekend Vice Mayor Vicky Vega-Cabigting to resign if the proper court finds there’s truth to his allegations of ghost purchases under the office of the Vice Mayor worth P120,000. 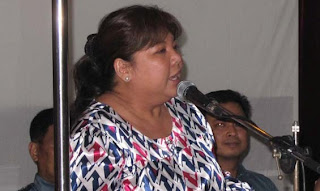 Lagman, at the same time, vowed to resign if there is no truth to his allegations over Cabigting.
Lagman said he would not have filed charges before the office of the Ombudsman against Cabigting and other councilors if there is no truth to his allegations.
Earlier, Lagman filed graft charges before the Office of the Ombudsman against seven city officials in connection with the alleged anomalous procurement of laptops and cellular phones.
Also facing graft charges, aside from Cabigting, are General Services Officer Menandro G. Dizon, Administrator Dennis Albert S. Pamintuan, and Councilors Jericho G. Aguas, Jesus S. Sangil, Alexander P. Indiongco, and Edgardo D. Pamintuan Jr.
Other complainants who filed the charges along with Lagman are broadcaster Medardo David and lawyer Francisco Ramos Buan Jr.
In their joint complaint-affidavit, the complainants claimed that the seven city officials connived with vendors of a cellphone shop to effect ghost purchases of four units of laptops in August 2011.
They alleged that “no such purchases were made and worse, no actual deliveries.”
The officials allegedly violated several laws including Republic Act 3019 - Anti-Graft and Corrupt Practices Act, Republic Act 9184 - Government Procurement Reform Act, Republic Act 6713 - Code of Conduct and Ethical Standards of Public Officials and Employees, and Section 52 of Civil Service Commission (CSC) Resolution 99-1936, dated August 31, 1999, otherwise known as the “Uniform Rules in Administrative Cases in the Civil Service, for Serious Dishonesty and Grave Misconduct.
Lagman said he has a letter coming from Acer Philippines attesting that the serial numbers of the four laptops they submitted to the City Government were non-existent and invalid.
"Hinahamon ko sila na patunayan na wala sila ginawang anomalya. Kung ako ay mali ako ay magbibitiw bilang barangay kapitan ng aking barangay," Lagman added
by: Reynaldo Navales
at 5:51 PM No comments: