Epifanio de los Santos Avenue (Tagalog: Abenida Epifanio de los Santos), commonly referred to by its acronym EDSA, is a limited-access circumferential highway around Manila, the capital of the Philippines. It is the main thoroughfare in Metro Manila passing through 6 of the capital region's 17 local government units, namely, from north to south, Caloocan, Quezon City, San Juan, Mandaluyong, Makati and Pasay.

Named after academic Epifanio de los Santos, the road links the North Luzon Expressway at the Balintawak Interchange in the north to the South Luzon Expressway at the Magallanes Interchange in the south, as well as the major financial districts of Makati Central Business District, Ortigas Center and Araneta Center. It is the longest and the most congested highway in the metropolis, stretching some 23.8 kilometers (14.8 mi). 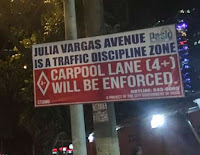 Ramon S. Ang, president and chief operating officer of SMC targets to submit a proposal to the Department of Transportation (DoTr) for a 10-lane, five-by-five expressway along EDSA.

The unsolicited proposal to the Department of Transportation to build a 10-lane elevated expressway on EDSA to ease traffic in the perennially congested highway.

It will be an elevated, steel toll road built higher than the Metro Rail Transit Line 3 (MRT-3), which runs along EDSA as well.

In a disclosure to the Philippine Stock Exchange issued on Thursday morning (September 19), SMC confirmed the news report, saying that the company will submit the proposal for the construction of a “10-lane five-by-five expressway to decongest the traffic situation along Epifanio Delos Santos Avenue.”

Reports also said that the elevated toll road will stretch from Macapagal Avenue in Pasay City to Balintawak in Quezon City, and will take 24 to 30 months to build.

DOTr Secretary Arthur Tugade also mentioned the proposal during the signing ceremony for SMC’s Bulacan airport project on Wednesday (September 18), according to Businessworld.
at 2:00 AM