China claims all of the South China Sea 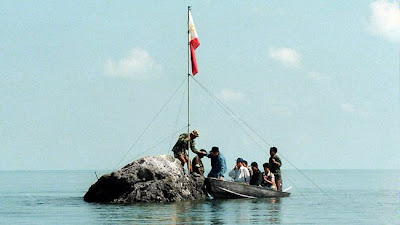 China claims all of the South China Sea as a historic part of its territory, even waters close to the coasts of the Philippines and other Southeast Asian countries.


China's military on Thursday vowed to defend the country's territory amid a stand-off with the Philippines in the disputed South China Sea, the official Xinhua news agency said.

China is locked in a maritime dispute with the Philippines over the Scarborough Shoal in the South China Sea, which is considered a potential Asian flashpoint due to the overlapping claims of several nations.

"China's armed forces bear the responsibility for the task of defending the nation's territorial sovereignty and safeguarding maritime rights and interests," defence ministry spokesman Geng Yansheng was quoted as saying.

The Philippines said Thursday it would seek more US military help during top-level talks next week, despite China's warning not to "internationalise" the tense territorial dispute.

Foreign Secretary Albert del Rosario said the Philippines was looking to the United States to help it achieve a "credible" defence system, and wanted to extract maximum benefits from a mutual defence treaty between the allies.

The United States and the Philippines are now holding military exercises though officials of both countries deny a link to the dispute with China.

The Philippines has complained over the past two years that China has become increasingly aggressive in staking its claim to the waters, with tensions spiking over the Scarborough Shoal standoff.
China itself is currently holding naval exercises with Russia off the Chinese coast which included live-fire drills on Thursday, state media said.

The exercises are the first ever dedicated naval drills between the two countries.
China plans more military exercises with Russia and central Asian countries belonging to a regional grouping which have been scheduled for June in Tajikistan, Geng said.

He added that China's recent tests of its first aircraft carrier had no relationship to the "current regional situation". 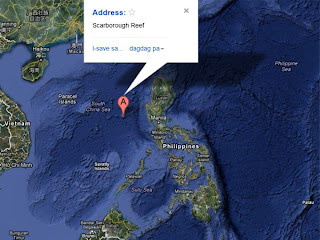 Despite reports of China’s latest incursion, Malacañang reiterated its appeal for sobriety as Filipino fishermen have joined the chorus of condemnation of China.

The University of the Philippines, meanwhile, took down its website Friday after it was allegedly hacked by unidentified supporters of China.

“We have always conducted our actions knowing that our goal, one of our immediate goals, is really to de-escalate tensions. This will be to the benefit of all parties if tension is really lowered and we hope that it will help in the negotiation,” deputy presidential spokesperson Abigail Valte said over radio station dzRB.

Valte also said it would be up to Department of Foreign Affairs (DFA) to determine whether the Philippines should ask Beijing to replace its current ambassador Ma Keqing, who was reportedly becoming impolite and impatient in talking to Philippine officials.

“We will let the DFA take the lead on that one,” Valte said.

Valte said it was not the Philippines that was aggravating tensions in Panatag Shoal.

“That is a matter of perspective and maybe from our side our commitment was to de-escalate tensions and we are doing just that. We have been consistently reiterating that the diplomatic track is the track that we have chosen to take and that everything that we do is in furtherance of taking that track,” Valte said.

Valte added the security of government websites would be strengthened after the UP hacking incident.

She also said it would be up to the Philippine Coast Guard to protect Filipino fishermen sailing to Panatag, originally called Bajo de Masinloc during the Spanish period.

She said it would be advisable for Filipino fishermen to avoid the area for the time being.

Meanwhile, Foreign Affairs Secretary Albert del Rosario said other ASEAN members should make a stand on the issue if they want to preserve freedom of navigation in the region.

“I think since the freedom of navigation and unimpeded commerce in the West Philippine Sea are of great importance to many nations, all should consider what China is endeavoring to do in the Panatag Shoal in order to pursue its so-called full sovereign rights over the entire West Philippine Sea on the basis of their 9-dash claim using a historical record that is clearly baseless,” del Rosario said.

“All, not just the Philippines, will ultimately be negatively affected if we do not take a stand,” Del Rosario added.

Del Rosario arrived last Friday from the US where he led in campaigning for the candidacy of Supreme Court Justice Florentino Feliciano for a seat in the International Court of Justice (ICJ). The ICJ elections will be held on April 27.

“We limited our focus on these two initiatives, preferring to discuss the overall topic involving the West Philippine Sea during our ‘2 plus 2’ meeting scheduled a little over a week from now,” Del Rosario said, referring to his coming meeting with US officials on April 30.

“I think what’s happening is they (countries) respect the process that this issue is being discussed by both sides and therefore they are holding their horses to weigh in on this issue,” DFA spokesman Raul Hernandez said in a press briefing, referring to ASEAN’s silence.

“We have not heard anything from ASEAN because maybe they respect that there is a discussion involving the Philippines and China and they would ask us if they want to weigh in on (this issue) at this time,” Hernandez said.

“It has to be resolved soon. We’re a small nation dealing with a big nation and we’re doing our best to assert our sovereignty and our sovereign rights in this area. We’re happy we have the support of our people,” he said.

“I understand the fishermen are a little bit worried about their safety, as they have been hearing that the Chinese would like them to leave the place, so I think they prefer not to go there this time,” Hernandez said, reacting to reports that Filipino fishermen were now avoiding the Panatag Shoal area.

The Philippines declared on Friday that it would proceed to the International Tribunal on the Law of the Sea (ITLOS) “unilaterally” to resolve the territorial dispute if China would not join Manila in defending its own position before the United Nations-backed tribunal.

Hernandez said China violated the agreement with the Philippines not to undertake any action that would aggravate the situation in Panatag Shoal with its deployment of more vessels in the area.
at 8:46 PM 2 comments:

The Crisis of Public Education in the Philippines 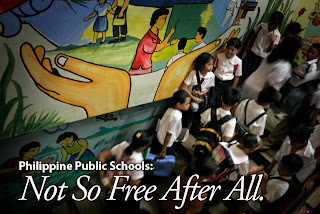 The modern world in which we live is often termed a “knowledge society”; education and information have become production factors potentially more valuable than labor and capital. Thus, in a globalized setting, investment in human capital has become a condition for international competitiveness.

In the Philippines, I often hear harsh criticism against the politics of globalization. At the same time, regarding the labor markets, I can hardly think of another nation that is so much a part of a globalized economy than the Philippines with nearly ten per cent of the overall population working beyond the shores of the native land.

Arguably, the phenomenon also has an educational dimension, as the Philippine society is footing the bill for the education of millions of people, who then spend the better part of their productive years abroad. In effect, the poor Philippine educational system is indirectly subsidizing the affluent economies hosting the OFWs.

With 95 per cent of all elementary students attending public schools, the educational crisis in the Philippines is basically a crisis of public education. The wealthy can easily send their offspring to private schools, many of which offer first-class education to the privileged class of pupils.


Social divide. Still, the distinct social cleavage regarding educational opportunities remains problematic for more than one reason. Historically, in most modern societies, education has had an equalizing effect. In Germany, for instance, the educational system has helped overcome the gender gap, and later also the social divide. Today, the major challenge confronting the educational system in the country, in most cases Muslim, immigrants. Importantly, this leveling out in the context of schooling has not occurred in this part of the world. On the contrary, as one Filipino columnist wrote, “Education has become part of the institutional mechanism that divides the poor and the rich.”

Let me add an ideological note to the educational debate: Liberals are often accused of standing in the way of reforms that help overcome social inequalities. While, indeed, liberals value personal freedom higher than social equality, they actively promote equality of opportunities in two distinct policy areas: education and basic heath care.

For this reason, educational reform tends to have a high ranking on the agenda of most liberal political parties in many parts of the world.

Although I live to this country for over 30 years now, I am still astonished again and again by the frankness and directness with which people here address problems in public debates. “The quality of Philippine education has been declining continuously for roughly 25 years,” said the Undersecretary — and no one in the audience disagreed. This, I may add, is a devastating report card for the politicians who governed this nation in the said period. From a liberal and democratic angle, it is particularly depressing as this has been the period that coincides with democratic rule that was so triumphantly and impressively reinstalled after the dark years of dictatorship in 1986! Describing the quality of Philippine school education today, the senior DepEd official stated the following: “Our schools are failing to teach the competence the average citizen needs to become responsible, productive and self-fulfilling. We are graduating people who are learning less and less.”

Let me highlight two figures: Reportedly, at last count more than 17 million students are enrolled in this country’s public schools.

At an annual population growth rate of 2.3 per cent, some 1.7 million babies are born every year. In a short time, these individuals will claim their share of the limited educational provisions.

“We can’t build classrooms fast enough to accommodate” statement from a DepEd Undersecretary, who also recalled the much lamented lack of teachers, furniture and teaching materials.

In short, there are too little resources for too many students.

Two alternatives. In this situation, logically, there exist only two strategic alternatives: either, one increases the resources, which is easier said than done considering the dramatic state of public finances, or one reduces the number of students.

This second alternative presupposes a systematic population policy, aimed at reducing the number of births considerably.
at 7:40 PM No comments: