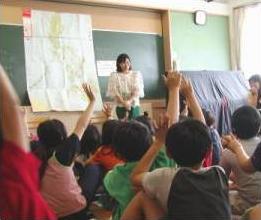 All teachers handling Grade 1 and Grade 7 were trained under Oplan Balik Eskwela for the K-12 curriculum, a Department of Education (DepEd) official said.

This week, their target is to train also the private school teachers, said Dr. Marcial Degamo, chief of the DepEd-Central Visayas quality assurance and accountability division.

These instructional materials won’t be ready in time for the opening of classes Monday.

The school population is estimated to increase by two percent. DepEd-Central Visayas Information Officer Lea Apao said they may come up with the exact number of enrollees in both public and private schools later this week.

“We are really busy because of the mass training for Grade 1 teachers in connection with the K-12 curriculum,” Apao said.

“We believe that the teachers are already prepared for this school year despite the challenge of the K-12. It’s the DepEd that needs to be prepared and it’s now time for the department to resolve issues like shortages of teachers, classrooms and toilets,” Constantino said.

Although the lack of classrooms and teachers is a perennial problem, Cebu City Schools Division Superintendent Rhea Mar Angtud said they are finding ways to solve these with the help of the City Government.

She admitted, however, that there are some public schools in the city that will still implement double shifts because of the lack of classrooms.

Some night high schools will start their classes in the daytime, including Luz, Basak Community and Oprra Night High Schools.

She already instructed her nine division and 16 district supervisors to monitor the problems that may crop up on the first day of classes.

The increase has averaged two percent each year, but may go up further because of an increase in the tuition in some private schools, she explained.

With a two-percent increase, around 175,300 students will go back to Cebu City schools Monday.